Why is CORBA used

Programming with CORBA and C ++ 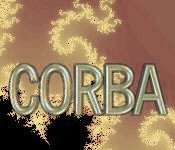 CORBA is a means for the relatively comfortable implementation of distributed software. This tutorial describes the introduction to the use of CORBA in C ++ programs. The free CORBA implementation MICO is used for the program examples (download).

CORBA (Common Object Request Broker Architecture) is a standard that describes the means of communication between different processes. In contrast to the conventional interprocess communication methods such as sockets or memory mapped files, CORBA relieves the software developer from having to worry about details such as communication protocols and data formats. Instead, CORBA offers the C ++ programmer's familiar view of objects that communicate with each other via method calls.

The CORBA implementation then takes care of the conversion and packaging of the data that has been passed to the method, of sending the method call over the network to the target object, of unpacking and reconverting the data there and of the actual method call on the target object. If the corresponding method should return data to the caller, then the whole thing is done again in the opposite direction. This process, which is hidden from the user, makes it possible, for example, to use an object in a Java program running under Linux that was implemented in C ++ and resides on a Windows NT computer.

CORBA is just a standard - not an implementation. However, there are various implementations of this architecture from a wide variety of manufacturers. Version 2.3.11 of MICO was used for the example programs contained in this tutorial. MICO is a fully featured and freely available CORBA implementation under the GNU copyleft.

The use of CORBA and MICO is to be demonstrated using a small distributed application for managing telephone numbers. This consists of a server that stores pairs of names and associated telephone numbers, and clients that are used to enter new names / numbers and for research. The development environment was MICO 2.3.11 under Linux with the gcc 3 and Windows 2000 with the Cygwin Toolkit 1.1. Before you can work with the examples, MICO must first be installed. Many Linux distributions such as Debian or Suse contain a MICO development environment as an installable package. Alternatively, you can download the source code, translate it and install it.

The first step in creating a CORBA application is the Definition of all required interfaces. Client and server later exchange their data via these interfaces. The interface definitions are made in a special language, the Interface Definition Language (IDL). Its syntax is very similar to a C ++ class definition. The intended example application manages with a single, simple interface called. This contains two methods: one for adding a new phone book entry and one for searching by name. The interface definition written in IDL is saved in a file IPBook.idl saved and looks like this:

The most important difference to a C ++ class definition is that the direction of the data transfer must be specified for the method parameters. The specification used means that data is only transported from the calling party to the object, analogously then means a data transport back to the calling party and a bidirectional data transfer. A return value (like string in searchEntry) of course always means that data is transferred back to the caller and does not have to be specified here.

One more word about the general design of CORBA interfaces: Here you should always keep in mind that every method call is a network transmission! A considerable overhead arises, especially when only a few bytes of user data are transmitted. At this point, one must beware of theorists of object-oriented design, who package everything and anything in objects.

In our example application, from an object-oriented point of view, it would make perfect sense to have an additional interface Entry with methods like setName (), getName (), setNumber () and so on. The addEntry () function in IPBook would then receive an Entry object as a parameter. The result of this design would be three times the number of remote method calls, all of which go over the network. An absolute performance killer!

Implementation of the server object

After creating the interface definition, the next step is the Implementation of the server objects (servants). On the one hand, a server object has to implement the application logic - the functions addEntry () and searchEntry () have to be filled with life. On the other hand, the server object must also establish the connection to the CORBA implementation, more precisely to the Object Request Broker (ORB), which is responsible for mediating the distributed function calls. There are different objects for this connection adapter. The older one is the one Basic Object Adapter (BOA). The more extensive and flexible one has existed since the CORBA Standard 2.2 Portable Object Adapter POA. Although MICO provides both adapters in the current version, the following will only deal with the use of the modern POA.

When implementing the server objects, the IDL processor contained in MICO relieves the programmer of a lot of work. The IDL processor is called on the command line, first you should use

set the correct environment (if MICO was installed in the / usr / local directory and bash is used - otherwise this line must be modified accordingly). The call

These are the methods that were specified in the interface definition. The IDL data type has now only become the C ++ data type, the IDL attribute finds its equivalent in the specification of the function parameter.

The work still to be done by the programmer is now limited to writing a new class that is derived from and implements at least the two pure virtual functions addEntry () and searchEntry (). It has become common practice to name this class with the suffix, so in the example. The definition of the class is in the file IPBook_impl.h: