Which soils produce the best wines

The wine-growing region of Beaujolais is geographically located in Burgundy, but due to the very own characteristics of the wines produced there, the area is considered an independent wine region. 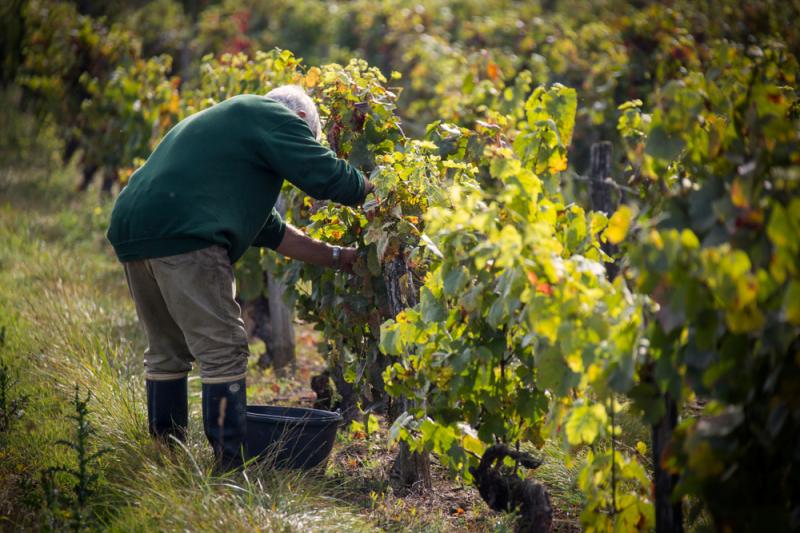 In contrast to Burgundy, the red wines here are not made from the Pinot Noir, for example, but from the Gamay grape.

The landscape is in the south of Burgundy and north of Lyon. The vines are grown on a vineyard area of ​​around 23,000 hectares, are located on hilly vineyards and the growing area is west of the Saône. The famous wines from the area are also referred to as Beaujolais wines, which is a term known around the world.

The area consists of several municipalities, the so-called crus including, for example, the districts of Morgon, Regnie or Saint-Amour. Particularly rich and expressive Beaujolais are produced in these regions. In addition to the 10 Crus districts, however, there are 36 other places that are authorized to produce Beaujolais wines.

The soils and the climate in the Beaujolais wine region

The soils in Beaujolais are usually very granite and / or clayey. A mixture of lime and clay can also be found in the soil. The area is at an altitude of between 350 and 400 meters and in the west is on a chain of hills, whereby the heights can rise up to 800 meters.

Due to the different nature of the area, there are three different climatic zones to be found in Beaujolais. Continental, oceanic and Mediterranean climates overlap here.

The climate can change very quickly from one climate zone to the other. In Beaujolais there are also various microclimates that benefit the vineyards in the north in particular - this is where the best wines in the region come from.

The grape varieties for Beaujolais wine

The red wines in Beaujolais are made exclusively from the Gamay grape, although Pinot Noir is also allowed and approved in this area. The red wines are usually very fruity and sometimes have a rather pale color.

The wines go well with many dishes and in summer, for example, the wines can also be enjoyed slightly chilled.

White wine is almost never produced in Beaujolais and only accounts for about one percent of the total production.

The white wines that come from Beaujolais are made from the Chardonnay grape and also have a very fresh and fruity taste and are pleasant to drink.

Since the white wines from Beaujolais are so rare, they are almost unknown, but are sometimes considered to be special delicacies.

Our recommendation for Beaujolais

The Château du Moulin-à-Vent winery is particularly well-known for “Les Hauts de la Rochelle” and relies on tried and tested methods in the production of quality wines. The wines are stored in more than 220 barrels and are matured without artificial embellishment or filtration.

The vineyard's grapes thrive on very old vines, some of which are 70, 80 or 100 years old. The age of the vines is just one of the reasons why the estate's wines are called first-class Beaujolais.

The kitchen in Beaujolais

In contrast to other areas of France, the people in Beaujolais are extremely hospitable and the doors of various winemakers are often open to visitors. In Beaujolais the clock strikes slower, fast food or falling of the wine are despised here.

As with the pressing of wine, the residents of Beaujolais go to great lengths in the kitchen and that should be appreciated. The dishes are varied and in addition to fresh vegetables from the region, a relatively large number of meat dishes are also eaten here.

Sometimes hearty, sometimes light, the cuisine is varied and usually always accompanied by a drop or two of wine.

In Beaujolais there are less internationally known sights, but the area is full of palaces, castles and imposing mansions. Of course, it should not be forgotten that the entire wine-growing region is one of the most beautiful wine regions in Europe.

The vineyards are lovingly cared for here and the small villages are also beautiful. Unique blossoming trees and a fantastic world of flowers are just waiting to enchant visitors.

Even if Beaujolais is less known as a holiday destination, anyone who has been here once will definitely come back a second or third time.

If you have decided on a vacation in the dreamlike area, you should not miss the following attractions:

More sights to see in the Beaujolais wine region

The castle in the vineyard

This 15th century castle is located in the middle of a vineyard.

At that time the castle fortress was built to defend the border between Burgundy and Beaujolais. Above the entrance, the castle is adorned with the coat of arms of the Madeleine-Ragny family and inside the castle there is an extraordinary vat from the 17th century.

In addition to the unique location of this castle, the inner courtyard is particularly pleasing to the eye. In the idyllic courtyard you will find fantastic Renaissance galleries, which are probably among the most beautiful in France.

The small town of Clochemerle is located in the heart of Beaujolais and is a dazzling little village, full of nice people. Here you will be overwhelmed with hospitality and with a little luck you will be invited to delicious wine tastings or small snacks.

There is also a Michelin restaurant in a beautiful hotel in Clochemerle. Feasting and then strolling through the wonderful streets of the town, the trip to Clochemerle can only be a success.

The Bagnols area is in the southern half of Beaujolais, where the area's more simple wines are produced. The special feature here are the golden stones, which is why the area is also known as "Pierres dorées".

On closer inspection, the stones are not golden, but rather ocher in color, but from a little further away, the village, which was built from the stones, shimmers like a golden oasis. Impressive and heartwarming at the same time!

Since the Beaujolais is, as mentioned, in the area of ​​Burgundy, the sights of Burgundy are of course not far away.

The Burgundian canals or the place Sens, as the gate to Burgundy, are wonderful sights that should also be on the plan when visiting Beaujolais.