What do the girls think

The first OECD education report on gender differences comes to the conclusion that girls are significantly less confident in mathematics than boys. This gender-specific difference is alarmingly large in Germany - significantly larger than in most other industrialized countries. Why is that?

The question of gender-specific differences in motivation was examined by the Hector study "What girls think about math".

Girls see less of the benefits of mathematics for their future lives. So they practically "only" study for school what is necessary to get good grades.

"This is the result of a current study by the Hector Institute for Empirical Educational Research and the Excellence Graduate School LEAD, which has now been published in the Journal of Educational Psychology. The study provides information on why men are significantly more represented in mathematically oriented professions as women and also how to motivate girls to do math.

The study shows that girls have just as high value convictions in mathematics as boys in some areas - however, they see the benefits of the subject as short-term. So while both genders attach the same importance to academic performance in this subject, girls perceive mathematics as a rather unattractive subject, which means less to them personally than boys and which they also find less useful for their future, "writes the University of Tübingen their website.

Andreas Clasen comments on the OECD Education Report on Gender Differences:
"The OECD education report on equal opportunities for the sexes unfortunately shows that many Germans still follow these old patterns of thought: Around 40 percent of parents can imagine that their sons have a career in science, technology or mechanical engineering, and that applies to their daughters 15 percent. To make matters worse, this thinking carries over to the children. Girls, who are as good at arithmetic as their schoolmates, are less likely to dare to pursue a career in these areas than boys. 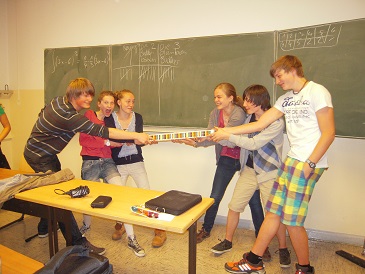 That has to change and that can change, as the Asian countries show, where the study hardly finds any gender-specific differences. It's actually very easy: Parents, relatives and teachers just have to trust the girls more. "

Report on the study:
DGB, scook - the platform for teachers and their students, Südwest Presse, Schwäbische Tagblatt and the Reutlinger General-Anzeiger. The dpa also takes up the study in a report on the current OECD education report.

Here you can read the OECD study "The ABC of Gender, Equality in Education Aptitude, Behavior, Confidence":
www.oecd.org/pisa/keyfindings/pisa-2012-results-gender-eng.pdf