Mathematically, the RGB color system can best be represented by a cube: 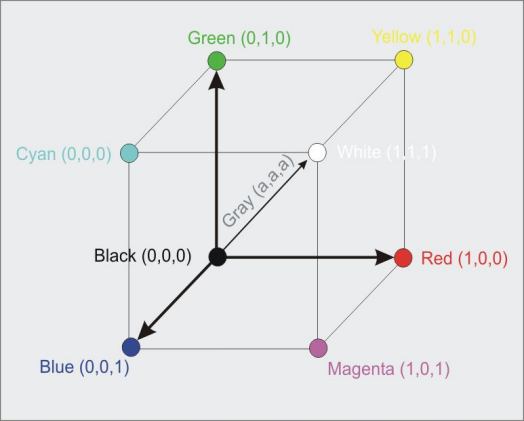 It is characteristic of a cube that each point in space can be clearly defined by specifying an X, Y and Z coordinate. If the red value is plotted on the X-axis, the green value on the Y-axis and the blue value of an RGB color triplet is plotted on the Z-axis, then a unique color value can be assigned to each point in the RGB space. The gray values, i.e. the spatial points at which the red, green and blue components are each the same, are located on the diagonal between the coordinates (R, G, B) = (0,0,0) and (R, G , B) = (RMax,GMax, BMax).

In the RGB system, a color is represented by three numerical values ​​that indicate the proportion of red, green and blue components.

Since in the RGB color system colors are mixed products from the basic colors red, green and blue defined, it is particularly applicable to devices that emit light waves themselves. Typical examples would be a color monitor or a color television set. If you look at the screen of a color television set or a color monitor with a magnifying glass, you will see that this builds up the picture from many individual points, each composed of a red, a green and a blue point. If you look at the picture from a certain distance, then these color components flow into one another and a uniform color impression is created.

In order to clearly define the color and brightness of a pixel, only the intensities for the red, green and blue components of the pixel have to be transferred to the monitor. The strength of an electron beam is then controlled via these intensity values, with the aid of which the luminous layer of the picture tube is stimulated to emit light.

The value for the Light brightness from the pixel is not trivial.

According to countless theoretical investigations and psychological tests, the perception of brightness for most people when looking at color images is determined by 59% by the green component, 30% by the red component and only 11% by the blue component.

RGB - color systems are used in computer and television monitors (but not in television broadcasts), scanners, photo cameras.

From a purely theoretical (i.e. mathematical) point of view, the CMY color model is a complementary model to the RGB color system, and the CMY primary colors are RGB - complementary colors: 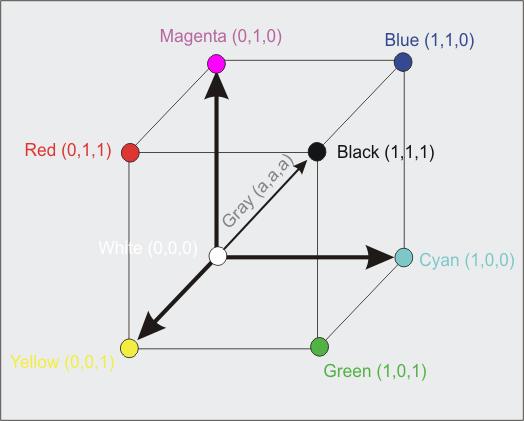 In contrast to the RGB model, colors in the CMY model are not generated additively, but subtractively. How does it work? The color cyan consists of blue and green. A color pigment with the color cyan reflects blue and green and absorbs red. Magenta absorbs green, and yellow absorbs blue. Most of the colors can be produced by skilfully printing the color points of the three basic colors next to one another and on top of one another. For example, if you print purple and yellow color dots close to each other, then red is produced, because the magenta reduces the green component and the yellow reduces the blue component of the incident light.

Technically, one proceeds in color printing in such a way that an image, if not already done, is broken down into its blue-green, purple and yellow color components. These color separations are then rasterized. The end result is three printing templates with which the three printing inks are put on paper in the form of a complex dot matrix. Under the microscope it looks something like this:

Fig. 8: Dot grid on the paper after printing

In theory, printing all three primary colors side by side results in black. In reality, however, the color pigments used do not behave as ideally as one would like with regard to their reflection or absorption properties. When it comes to color printing, one is therefore usually not satisfied with the black that can be produced with the three basic colors. To increase the contrast, there is usually an additional pure black is used, which covers better than that which can be obtained by overprinting. Therefore, a fourth component was added to the CMY model, the K component, which stands for black (blacK) - this is how it came about CMYK model.

In addition to black as the fourth color, other pure colors are also often used in color printing, in particular those that are difficult to produce using the three basic colors. Gold would be a typical example here. These special colors are called spot colors.

But there are also a number of other color models that are not based directly on a 3-component mixing process: HSV, HSI, HLS, HSB and others. We want to take a closer look at one of them, the HSV model. All others differ from this only in detail, but are based on the same principle.

RGB color model is quite impractical when it comes to using color intuitively, e.g. when designing or retouching an image. Why is that? Just try to intuitively determine the red, green and blue values ​​for any color you see around you. How do you have to change the RGB values ​​to turn a light red into a medium red?

The HSV model uses a completely different representation than the RGB system to define a color. HSV is the abbreviation for HUE, SATURATION and VALUEwhich means hue, saturation and value. In this system, a color is not viewed as a mixed product of the three basic colors red, green and blue, but the color is defined by specifying a hue with a certain saturation and a certain intensity.

What is meant by a hue, a color saturation and a color value? As with the RGB system, a geometric structure has been chosen to define the color system, only this time it is not a cube, but a circle. The colors of the visible spectrum are arranged on this circle. The hue or the HUE value of a color can then simply be specified as the angle of a pointer that starts from the center of the circle. 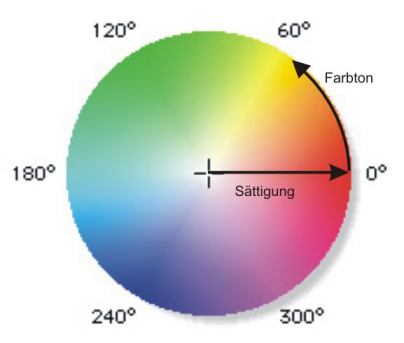 The individual colors are thus arranged like the numbers on a clock. Its position is defined by the angle of the color pointer and can therefore be between 0 and 360 . Usually pure red is placed at 0, pure green at 120 and pure blue at 240. This convention is at least adhered to by most drawing and image processing programs, but it is ultimately a matter of definition. In television technology, red is on the color wheel e.g. at 104 .

With the Saturation value indicates how pale or how strong a color should appear. Different saturations of a color arise when a pure color is mixed with white color. The lower the saturation of a color, the more white it contains and the paler it appears to us. Natural colors have low saturation values. Colors that are too saturated therefore appear unnatural and overemphasized.

All that remains is to clarify the meaning of the Color value or the intensity. This is not difficult, because the color value simply indicates the lightness of a color. It is also between 0 and 1 or 0 and 100%.

The main consequence of this is that we cannot see a color until we have assigned a certain value to it.

What advantages does the HSV model offer compared to the RGB model? The main advantage is that hue, color saturation and hue are independent characteristics of a color. The RGB values, on the other hand, are very dependent on one another. If you change one of the three color components, you may not only influence the hue, but also the saturation and brightness at the same time. The HSV system thus offers a much more intuitive way of creating or changing a specific color.

The HSV system also offers advantages when it comes to retouching. Some image processing programs allow you to change only certain colors in a targeted manner. Take a look at the fruit on the pictures below.

Here, the red of the tomato in the left picture was converted into an orange by simply shifting the HUE values ​​of the red tones by a certain color angle. Now the tomato doesn't look so ripe anymore!

For the programmer, the HSV system is also extremely useful. For example, it is very easy to find all red tones in a picture, you just have to search for HUE values ​​that are between approx. 330 and 30. Filter operations such as edge detection or edge sharpening only need to be carried out with the VALUE part. You can easily change the color saturation by reducing or increasing the SATURATION component.

Unfortunately, there is also a serious disadvantage. Since the common digitizers only capture color images as RGB images and the available graphics cards can only display RGB images, an RGB image must first be translated into an HSV image, processed and then translated back again. Despite the simple conversion process, this is associated with a considerable expenditure of time, especially with larger images, and hardly allows interactive work.

And how exactly (mathematically speaking) a television color system is defined, let's take a look at the example of the YUV system here.

The YUV system is a variant of the HSV color model. 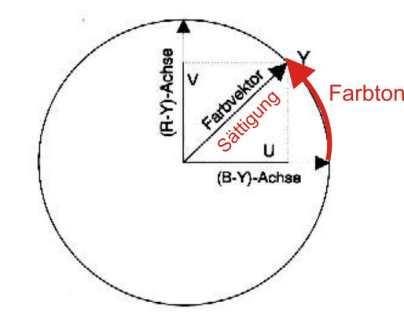 Fig. 11: for the definition of the YUV signal

The signal is based on the intensities of the red, green and blue components at a pixel, as measured by an RGB camera. Y is the overall brightness. You can look up again above how this is calculated. The angle and length of the color vector, which is synonymous with hue and saturation, are defined by vectors U and V. These are calculated as follows:

Since the two axes are scaled with different values, the color wheel is deformed into a "color oval" in television technology.

So, the video signal now consists of two components, the Y signal (Luminance), which indicates the brightness (intensity) and which is calculated from the U and V Color signal (Chrominance), whose phase position (angle of the pointer defined by V and U, see Figure 10) corresponds to the hue (HUE) and whose amplitude (length of the above-mentioned pointer) corresponds to the color saturation. The chrominance signal is modulated onto the luminance signal with the aid of a carrier frequency.

All of the color systems described above have two major disadvantages:

But they wanted to have a color model that was free from these two disadvantages, i.e. granted device independence and could represent all colors perceivable by humans. This is the goal people have made Commission Internationale d'Eclairage (CIE, International Commission on Lighting) posed in 1931. This commission determined the so-called normal observer through tests on 17 people, i.e. without visual disturbances. Then the virtual ones Primary valences Are defined. These are the wavelengths of the primary colors of a color system. The primary valences in this system are called virtual because, in contrast to the RGB system, for example, they are not in the visible range of light. This means that all perceptible colors can be displayed with them. This is how CIE-XYZ - color model was born. The X value roughly corresponds to the red / green component of the color, the Z value to the blue / yellow component and Y almost exactly represents the brightness. Instead of absolute color values ​​X, Y and Z, you can also specify color value proportions:

Since these proportions add up to one, and thus

applies, you can get by with two numerical values ​​to describe hue and saturation. If the brightness is also required, the Y value is added. If x and y are plotted in a diagram, you get a section through the CIE - XYZ - color space, which is actually three-dimensional: 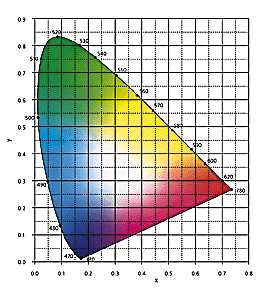 The CIE - XYZ system has evolved over time. This further development from 1976 is now called L * a * b (often abbreviated as Lab) or CIELAB.