What kind of element is zinc

Together with copper, zinc is one of the oldest working metals known to man. In the Middle East and Central Asia, brass, the alloy of these two metals, was probably in use around 5000 years ago. With a concentration of around 80 milligrams per kilogram in the earth's crust, the metal is among the 25 most common elements and occurs in important deposits that were deliberately exploited several thousand years ago. Chemically, the silver-white, quite reactive metal is similar to magnesium: Both form divalent ions of similar size; in the metallic state they quickly become coated with a passivation layer and react in a comparable way with water and acids. However, zinc forms much more covalent bonds - under special circumstances even with itself.

Zinc is created cosmically in star explosions of all kinds and is the fourth most common metal in technology after iron, aluminum and copper. It is extracted from the mineral sphalerite, which mostly occurs in massive ore bodies deposited by hot volcanic solutions. In prehistory and early history, zinc was used almost exclusively as an alloying ingredient for copper, with which it forms brass. In ancient times, coins and utensils made of brass were widespread, and there were also alloys with a very high zinc content. 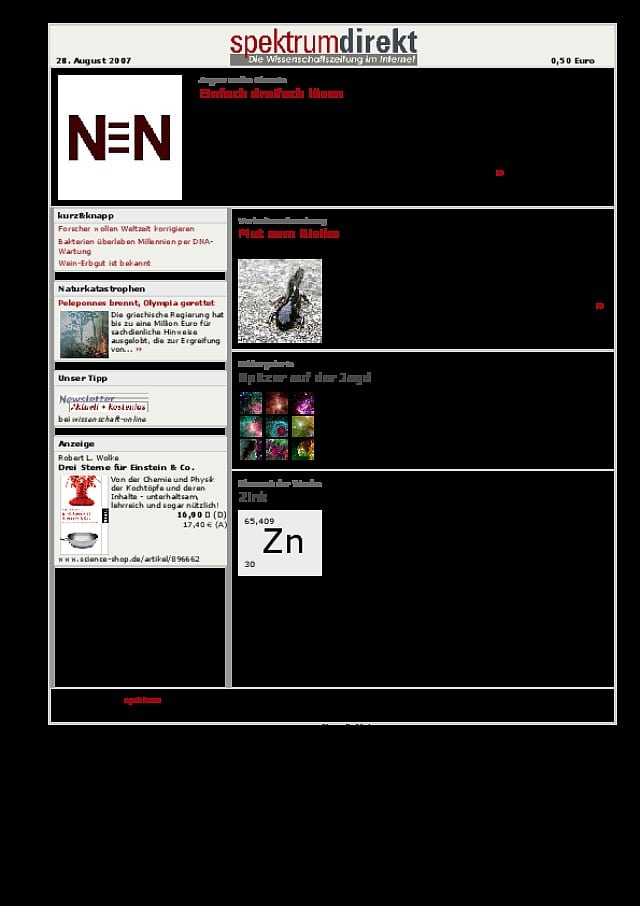 Today the element is mainly used for electroplating. Iron or steel is electrochemically coated with a layer of zinc, which protects the component from corrosion because the base metal is the first to decompose when it comes into contact with water and oxygen. In shipbuilding in particular, so-called sacrificial anodes made of zinc are used to protect metal parts according to the same principle. A significant proportion of the zinc consumed goes into the production of brass for a wide range of technical applications - this is more stable and more corrosion-resistant than pure copper. There are also various different zinc-based alloys, including those with a fairly low melting point that can be cast on the assembly line, and special semiconductors. The element is used as a substitute for the rather poisonous lead and as an anode material in alkaline batteries and zinc-air batteries. The demand is currently increasing so enormously that the metal is considered to be one of those elements for which significant supply bottlenecks can occur in the next few years.

Zinc compounds are also of great importance. Similar to titanium dioxide, zinc oxide is a widespread white pigment and is also semiconducting, zinc sulfide crystals are found in luminescent pigments and lasers, other salts are used as fungicides in agriculture, as food supplements, miracle weapons against colds or in organic chemistry. In biology it is an essential element for all organisms, it is located in the active center of several hundred enzymes, including those that interact with DNA. The metal is one of the most common in the body, and sperm contains a particularly large amount of it. Globally, a significant percentage of the world's population is said to be chronically deficient in zinc. Contrary to popular belief, the problem does not occur more frequently in vegetarian or vegan people than in meat eaters.